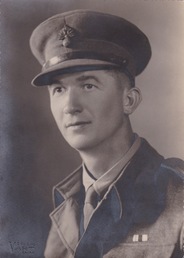 This interview took place on 13 July 2020 during the UK 'lockdown' and was undertaken with my son Alex:

How are you coping with lockdown?

I am finding it harder than I expected but I think it is important to follow the Government's instructions in order to avoid catching the Virus.

What did you want to be when you were at school?

Like most boys I kept changing my mind, but for a few years I rather fancied joining the RAF, but at age 14 I had a sight test at school. The nurse said that my eyes were fine, except for the fact that I had bad 'red/green colour perception', which meant I had trouble picking out bits of red in a green pic. I was told not to worry, except that I could not become a pilot, which was a pity as that was top of my career list at the time.

How did you get interested in uniforms and military history?

I have my father Rowland Thomas's British Army uniform and as a boy I used to play with it. I also used to read comic-books like 'Battle Picture Library', which featured German officers shouting in German. I then decided that I wanted to speak German and learn about military uniforms, to see if the comic-books were correct.

How long have you been writing books?

My first book for Osprey was in 1982, although I wrote it with a co-author, Peter Abbott.

What is your favourite period in military history?

Do you get to choose the topics of the books or does it depends on interest?

My editor at Osprey agrees a subject with me; I then write a proposal which he takes to the Editorial Committee. If they agree then I have a project. Usually they are only interested in armies in wartime, not in peace-time.

Is there a place in the world that you would like to visit, which you have not visited before?

Albania, a strange place, the poorest country in Europe. It is the stinginess that fascinates me.

Is there a place in the world that you would like to visit again?

New Orleans. I went in 2004, just a year before Hurricane Katrina striuck, The city had a fantastic buzz. I wonder what it is like now?

Is there a book that you would like to work on?

I hope to write a book on Czechoslovakia in World War II, a very neglected subject.

What advice would you give aspiring writers and is there any advice that you know now that you wish you knew when starting out?

If you want to write one book and get rich you should choose fiction. I write military books for my own satisfaction, not for money. Keep the day job and write in your spare time.

Which is your favourite book, that you have written, and why?

That's difficult. Usually it's the book I am working on at the time, but if you insist, it is 'Axis Forces in Yugoslavia 1941-45', because it deals with Croatian uniforms, which I find very beautiful.

Which is your favourite book, that you have not written, and why?

Probably 'The Armed Forces of World War II' by Andrew Mollo, because it covers all the armies, navies and air forces which fought in World War II

Was there an expectation that you wanted your sons Dominick and Alex to become authors too?

No, I don't believe I should expect my children to have the same interests as me, although I would have been delighted if they had.

What is your next book?

What is your favourite film?

'Back to the Future'; favourite war film 'Paths of Glory' by Stanley Kubrick with Kirk Douglas.

What do you like to do in your spare time?

Being with family and friends; reading history, especially military history.

Thank you to my son, Alex, for finding the time to put together the interview.